6 MONTHSS! I CAN FINALLY SEE THE FINAL OUTCOME HOORAH!

The inner part did not shrink as much as I wanted it to. They will rub against each other.

I am so tempted to do a revision (I wonder if that is charged though).

And perhaps do some work on my arms, pits, abs, flanks and so on! Dont get me wrong. I work out almost everyday, but mmm the fats are still lying above my muscles, whatever little I have on me.

3 months post-op and I have kept a super close eye on my diet. It is scaring all my friends. I no longer feel like eating what they do. But.....

I still succumb to sweet food! Though the frequency is way lower!

And yes, I can't wait to do the sports I love and take my calming night runs. Swelling please be gone!

Went to the masseur at Revive Wellness yesterday (thank you for the awesome prices you managed to get us, Dr Arthur and Co.). It was indeed a great relief. Anyway, my calves were swollen LIKE CRAZY because I went to run the day before. It hurts and I don't think it has hurt like that in a long while.

So, according to the masseur, I have to wait till the swelling has disappeared before I can run. The lymph nodes are not able to detoxify my body effectively now. That's super sad because I'm barred from all my runs!

It's been a week after the lipo and (wo)man, that has been the BESTEST decision i have made. I am still in trememdous pain though and going to work and school is quite a chore. I will let the photos do the talking. Afterall, a picture speaks more than a million words. 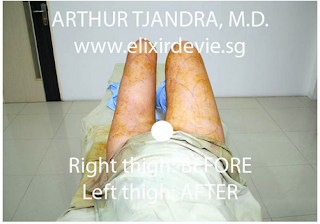 The thigh on the left depicts after-op, right shows before-op.

The difference is just too vast! I felt much lighter after the op (though it may not reflect the same on the scales, just take note!), and simply could not believe that the thighs belong to me! So yea, to me, it has definitely been a worthy investment, thought honestly despite its relatively affordable prices as compared to the other doctors, the cash I had to fork out for the thigh lipo is not small and did burn a big hole in my pocket. 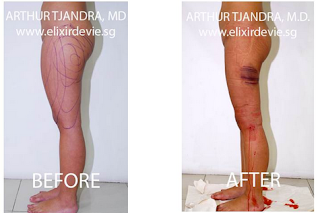 this photo was taken post-op Day 1.

So yes, cannot wait for the pain and swelling to dissipate, so that the final results will reveal themselves.

You can blame it on my perfectionistic nature, I kind of felt that they were not small enough for me, even after Dr Arthur removed like 3 litres of fat, which was in reality quite a massive lot. Will probably return for a Part 2  depending on how it looks after 3 to 6 months.

Thank You Dr Arthur! I am quite amazed by what lipo can do!

I have always been dissatisfied with my humongous thighs. Not only do they jiggle, they rub against each other and cause uncomfortable abrasions sometime. I look horrible in shorts, the middle of mini ones ride up, and I lost confidence in short skirts too.

(For those who are wondering, no, my thighs were not the way the are two three years ago. I was actively engaged then but they grew exponentially when I started my deskbound job.. AH the perails of life!)

In any case, I refused to let fate dictate the way I look or my confidence. After gymming for three months, which did nothing to resolve my enormous thigh problem, I decided to look for alternatives. I came across diet programs, underwent carboxy therapy and even slimming centres. But honestly, the results were (1)Snail slow and possibly required extended treatment, (2)Not working and were just scams. I was not only left dejected and disappointed, but annoyed that I had wasted money on useless programs and treatments. Seriously, lipo had never been at the top of my list. I had always deemed it costly, unnecessary, risky, and possibly only fit for fat people.

My perceptions changed, though, after I chanced upon several writeups on liposuction. It sounded like a gauranteed approach. Sure, there are risks involved. People have died from it. But the freak accidents could have been avoided if not for the negligience of the surgeon. After doing a cost-beneft analysis (yea, everyone does that, don't they?), I decided that this was soemthing I wanted to go for. However, as a clerical staff who had to fork out money to finance the part time studies, the cost was a big, if not impeding, issue for me. Although my initial intention was to get the lipo performed on me in Singapore, a few thoughts surfaced in my mind and these made me hold bac my decision:
1. COST (In caps because it was an insanely big factor)
2. It is really not as safe as I thought, judging from the deaths that occurred
3. Amount of fat that can be extracted, which doesnt make alot of sense to me
4. The doctors can be quite inexperienced, or so I think, since there arent many people who are into lipo here in Singapore

Thus, I went on to explore cheaper alternatives. There were Bangkok, Hatyai, and Medan. All three received pretty desirable reviews and had their respective advocates, making it a tough decision to make. Since the pricing was competitive, I started to look into credibiltiy, aftercare services, state of the clinic, reliabiltiy, and trustworthiness. Medan, or more precisely Dr Arthur's clinic, fitted the bill. Photos depicted the clinic to be clean, it had a stay-in doctor (really, I think this is quite important since one will possibly be in a whole lot of discomfort and derrangement right after the surgery), clinic helpers who also performed the daily massages, a helper who looked into the meals of the patients, and it even provided two-way airport transfers and chauffeur services. Sounds reasonably awesome right? Furthermore, prices were at SGD1,000 per lipo area (and SGD700 per area if one is a student or working adult who earns less than 10k a month). The rate is really unmatchable, given the expertise of Dr Arthur as well as the aftercare services available.

In essence I had my appointment booked on 13 Nov 2012! Kind of excited to see the final outcome (: Will update again.
Posted by newbody at 01:00 No comments: